hello! long time no blog. I finally got around to changing my blog design, and now that it's finally visually appealing to me, I feel like I can write something here again. I also changed the name of the blog from "smallfish" to "skttsh blog." it's possibly more "me," and I also just felt like making a change.

my last post was at the beginning of june, so here is a brief summary of things that have happened since then:

got a new puppy!! his name is sunny, and he is a toy poodle / bichon mix, aka a poochon. or a bitch poo. sometimes (pretty often) the latter fits him much more. I haven't any pictures of his face handy, so that will have to wait until next time.

I started working out and eating healthy. (yes, all my workout clothes are this bright; no, my thighs are not actually that thin—it's all a strange and magical optical illusion) i joined a boxing gym with my friend candy, and we went twice a week until seasonal shifts started up at work a couple of weeks ago. since boxing classes are in the evenings, and I now work from 3pm to midnight, I started going to yoga in the mornings instead, three-ish times a week. in addition, I tried to eat healthier in general, and especially for the month of november; I ate as cleanly yet nutritiously as possible every day, and I lost a total of 8 pounds in the first two weeks. remained more or less stagnant since then, due to travel and holidays...but my mood and energy level have increased tenfold, and I feel the best about my body that i've felt since moving home last september.

I became a team lead at work and won the Winston Churchill Award for "exemplary performance in handling extraordinary customer situations." not in that order. I finally got my first raise...of $1. after working for a year. whereas everyone else has had two raises and is now making $3 more than when they started. upper management's reasoning for this is that I started out with a higher wage than everyone else, so "it's only fair" to them (obviously not to me) that I stay at the same rate until they catch up. let's just say that the reason I stay at this job is the people around me, not the attitudes of those making the business decisions. but anyway, it's nice to be recognized for doing something well, and to get to have new people to boss around (i'm joking...mostly). and I get to attend MEETINGS. and actually have a say in these meetings! I know people generally tend to dislike meetings, but it's nice to get heard and have input into the way things are run (if only I could have some input as to how much I get paid...). I've also been teaching email writing workshops, for the same reason I won the Winston Churchill award (and the same reason that escalated customer situations tend to come my way...but I don't really mind). halloween happened! candy (right) and i (left) dressed up as a crazy hair stylist (her) and victim/client (me). we won our office costume contest!! everyone took pictures of us all day, and it was great and happy and crazy and wonderful. I continued spinning yarn...nothing new there...

I flew to pittsburgh so that ting and I could take our yarnie business to our first yarn show ever! we had a booth at indie knit and spin, and it was truly an awesome experience. also, if you'll take a close look at what is on the table at the front of our booth... 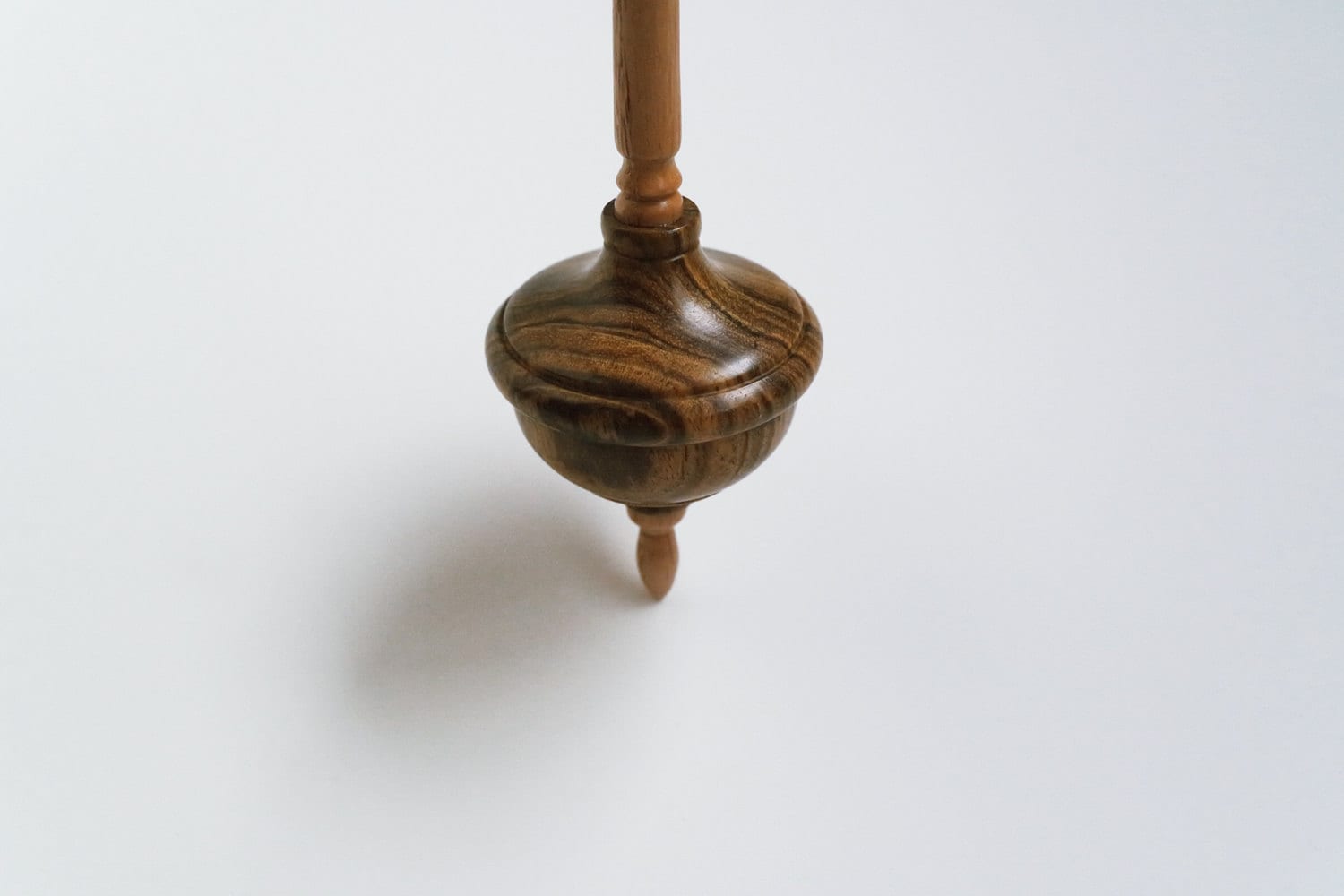 my dad started making support spindles!! he now has an etsy shop, called n x n A.K.A. n by n. there are only three spindles in the shop at the moment, because they are apparently a huge hit and have almost all sold out. he is working on replenishing his spindle stock as quickly as possible, but in the meantime, there are several bottle stoppers available for sale, if anyone is a wine drinker or knows one who would like a handmade stopper for christmas. c;

and I dyed my hair pink!! this is something I'd wanted to do since high school, but never thought I'd get the chance, due to my traditional conservative asian parents. out of respect for them, i told myself, "well, they won't want me to dye my hair in school because teachers might look down on me..." and then after high school, then university graduation, it became, "they won't be happy if I dye my hair before I find a job." so now that I'm out of school and have a job in which lots of my coworkers and managers have crazy colored hair, there are no more arguments against my dyeing my hair an unnatural color. of course, my parents had arguments...but since they basically all boiled down to, "our friends and relatives will look down on us for having a daughter with pink hair," I decided that their reasoning was selfish and therefore not valid. I respect my parents' wishes as much as I can, but if I don't agree with their reasons, then I can't let them keep me from living my life my way. I even went so far as to buy a black wig so that I can have normal hair if I have to appear in their "social circle." their words, not mine; they texted me when i was at work one day: "just think about if someone with pink hair appeared in our area and our social circle." excuse the language, but FUCK their social circle. people will find something to talk shit about anyway, so you might as well do what you want and look how you want.

so yes. excuse the length of the post and the motley variety of photo shapes and sizes. once I get back into the swing of things, posts will become prettier and more cohesive (probably). and I want to note that the layout and name of the blog are not the only things that will be changing. I started this blog as "a place where I blog about things I make." and I will still blog about things I make. but I also want this blog to be a record of my life, feelings, and opinions. I've recently come off all medications (from 15 pills a day to, as of today, NONE), and I need something to fill the void, and writing has always done the best job of that for me. so I will write here, when I feel the need, and it may not all be pretty, and it may not all be palatable, but I don't need my blog to appeal to lots of people, or to be clean and PC. what I need is a place for ME. and that is what this blog is going to be in the future.
\ \ 01:21
/ / about me, family, friends, good things, health, journal, she talks a lot, spinning, work, yarn